“Tony had a perfect life — until his wife Lisa died. After that tragic event, the formerly nice guy changed. After contemplating taking his life, Tony decides he would rather live long enough to punish the world by saying and doing whatever he likes. He thinks of it as a superpower — not caring about himself or anybody else — but it ends up being trickier than he envisioned when his friends and family try to save the nice guy that they used to know. “ 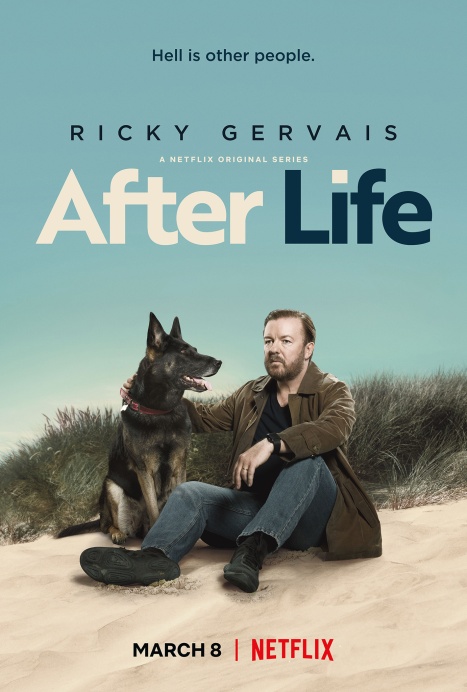 If you have Netflix (who doesn’t) and/or you’re a fan of British comedian Ricky Gervais, you might have heard of this new series, After Life. I was made aware of it by a friend, and I initially avoided it thinking it was a little too close to home.  Well I’m happy (?) to admit my preconceived notions were not affirmed.  This show gave me ALL them feels.  I laughed (a lot), I cried (also a lot), I got annoyed, angry, amused and felt peaceful towards the end of the show.  Perhaps what stood out to me the most was the authenticity with which Gervais wrote about spousal grief without having experienced it firsthand.  He tells a story that’s so perfect a mixture of the mundane daily life, the profound sense of loss, the internal struggle and isolation one feels, and finally those fleeting moments of joy or levity that don’t happen nearly enough.

My “grief journey” such as it is, has been a messier one.  As I settled into life as a widow and the “obligatory period of everyone feeling sorry for you and giving everything you say or do a total pass” ended, it was obvious that my journey was going to be a rough and dark ride.  I haven’t turned to Jesus. I haven’t spent my days being nothing but “grateful” for the time Bryan and I had together. I haven’t thrown myself into my work, or taken on some great life goal like running a marathon or starting a foundation, or going on a speaking tour, or any of the other myriad of “acceptable” grief rituals propagated throughout media and society. Instead, I’ve owned my general “zero fucks left to give-ness” with gusto! As I’ve said before, I just don’t have the mental bandwidth to be polite and and listen to your stupid story about your new gluten-free diet, or let assholic people’s behavior go unchecked. The tagline of the show “hell is other people” could have been written about me.  If my circumstances have taught me anything, it’s there’s so much wrong and injustice in the world and I won’t have it! And by that I mean, I won’t let it happen without first providing a pithy and cynical comment for the record.  So I feel like this is why After Life resonated so deeply with me.  Dr. F pointed out just the other day that perhaps it’s because watching a show that mirrored back a grief experience more similar to my own made me feel less alone on this journey.  And I think she’s right. Tony’s “superpower” is one I was also intimately familiar with. For a period of time I too thought it was suddenly so freeing not to sweat the small stuff and not give a fuck about what I said or did.  I had no fear of death and knew that was always an option in my back pocket.  While it didn’t end up being my superpower per se, I considered it my silver lining or consolation prize if you will, to the state I found myself in.  [Side Bar: Bryan HATED the phrase “per se” so I just cringed when I wrote it. Sorry B! RIP. much love] Tony’s also got that one thing that keeps him from completely going off the proverbial ledge: a dog named Brandy.  His wife loved that dog and Brandy’s a loyal companion, so the least he can do is take care of the dog in honor of his wife’s wishes (which you see periodically throughout the show).  I think that’s such an important aspect of grief too.  While you’re “in it” you’ve got to have someone or something that keeps you grounded in reality and keeps you going. It’s nearly impossible if you don’t.  It can be anything, a hobby you’ve always loved, a pet, a person (but that can be tricky), an event you’re looking forward to, or maybe just the will to see it through.  For me, I think it was a Katy Perry concert I’d planned months in advance–we can unpack at another time–and maybe the stubborn desire to not accept that my life would end on such an unceremonious fart.  Even when I was at peace with being done, something would just say “yeah, but fuck that. that would be so lame to let this beat you.” 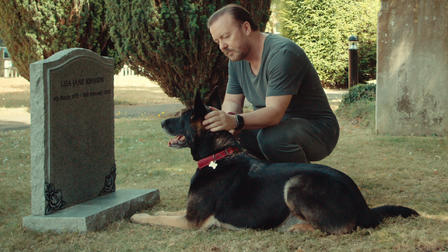 Ricky Gervais has commented publicly that nothing he’s ever done in his years-long career has had this much of a reaction or positive and intense response. Not even The Office (crazy I know! But I think the American one is better, oops)! He’s been reading comments on social media and is writing a second season. I don’t usually tweet, @, or comment on the LinkedIn profiles (that’s still a thing right?) of celebrities, but in the last week since finishing the show, I let him know what this show has meant to me and to thank him for “getting it”.  It’s one thing to find a movie, show, book, album etc. that resonates with you and inspires you to be great; it’s a much rarer feat to find that same connection when you’re at your lowest and some piece of mainstream media is willing to get in the trenches with you.

Okay I guess I shall elaborate if I expect this to ever get published in any kind of research journal of fine repute. This is my less than subtle, bitter way of saying I’ve got no time for women who think it’s cute and forms camaraderie to complain about all their husbands’ mundane shortcomings in a very public forum, i.e. a kid’s birthday party where he is not helping out enough. I. AM. NOT. HERE. FOR. IT.  Once, I tagged along to a birthday party for my nephew and was horrified by what I saw, heard, smelled, and tasted! Aside from the fact that kids’ birthday parties nowadays have to somehow be a social event for the parents as well by forcing them to stay the entire 4 hours (barf), these kids are spoiled beyond belief! This party might as well have been a soft opening for the next Cirque de Soleil show. What happened to a slip n’ slide and some pizza from Little Caesar’s? But that’s a post for another time.  What I encountered was a privileged white woman in a gaudy McMansion running around frazzled and talking mad shit about her husband, who was casually watching football.  Now I’m not defending the lazy, chauvinist guy on the couch, but I am defending the fact that she chose to marry him and she got what she got. So frankly, if he does what he’s always done, you have no one to be mad at but yourself.  Plus, I assume he left the couch at least occasionally to go to work and pay for that structure that some people refer to as a house, but I thought was more an art installation depicting the housing crisis of 2007. Also, for the record, all of these tasks he wasn’t completing to her specifications were ridiculous and unnecessary. I’m pretty sure that if the green PJ Masks (some random kid shit) goes before the blue one, the party will survive.  Anyhoo, she then proceeded to gather all the hens, I mean moms, and me, around her giant granite kitchen island and roll her eyes and tell us what a loser he is and dick he’s being.  I had just met her that day, but was already over it, as it were, by the Trump sign I’d seen earlier in her front window. So I felt the need to say “yeah…but at least you have a husband.”  The silence was deafening.  I know that she knew my situation, but still thought I would delight in the take down of her beloved (it’s debatable). Well, false.  I promptly turned around and filled a glass with the signature cocktail (?) chosen for this 4 year old’s birthday party.

The source of Trump Tammy’s ire.

While this is an extreme example, I find I notice the one off negative comments about spouses much more nowadays. And it really grinds my gears! Aside from the obvious lack of husband due to his permanent vacation, I can honestly say I’ve always found it ugly and never spoke about Bryan that way when we were together. Now my distaste is just turned up to 11. Of course we fought and of course he annoyed the crap out of me, but I didn’t think telling an acquaintance (or rando I just met at a party) how bad he was at loading the dishwasher was “fun” or even made him better at loading said dishwasher.  This is separate from confiding in close friends about relationship problems and bigger issues.  That serves a very important purpose, and I’m happy to be a sounding board for my friends to this day.  I just want people to take a step back sometimes and be thankful that he’s even there to yell at about how he laid the PJ Masks characters out so shittily in the first place. Oh, and keep it to yourself, because it’s frankly a boring conversation topic to begin with.  That is all.

Making things up since 1837. Contact me at sendittogordon [at] gmail.com

A daily selection of the best content published on WordPress, collected for you by humans who love to read.

The best longform stories on the web

The Art and Craft of Blogging

The latest news on WordPress.com and the WordPress community.